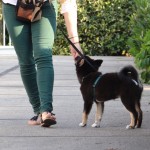 They are used to drive sheep and to round them up in the early Fall when the sheep are collected from the mountains.
The Icelandic Sheepdog is a lively dog and a quick learner, sociable and willing, with a cheerful spirit.

He loves human companionship, following you around everywhere and sleeping at your feet.
It’s very hard for him to be alone for a big part of the day. It will make him most unhappy.
For the same reason the dog can not live in a kennel. He should not be separated from his household, because he will lose much of his special characteristics.
He also enjoys being with other animals that belong to his household.

It will bark at running animals, which is part of his herding nature but he has almost no hunting instinct, although running animals do have his interest. You rarely need to call the dog as it makes sure it keeps track of you because he certainly doesn’t want to lose you. He is very intelligent and easy to train.

It’s a very sensitive and extremely affectionate dog. He is very watchful and barks at strangers, but never bites, because he’s not aggressive. He loves children but that doesn’t mean they can do everything to or with him. A dog is still a dog. 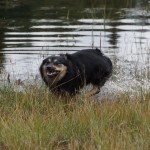 In spite of this positive story this breed isn’t fit for everybody.
The Iceland Dog is a working dog with lots of energy and because of that he needs lots of free exercise. Just walking up and down the street isn’t enough for this dog. If he isn’t able to get rid of all this energy he will become a frustrated and nervous dog, easy to recognise because of his excessive barking and other nervous behaviour.

Because the dog loves being in human companionship it’s very hard for him to be home alone for most of the day.
The Iceland Dog is a very sensitive and affectionate dog which makes him an unfit dog for people who aren’t able to raise him consistent or for people who are shorttempered.
Keep all off these things in mind before you decide to take an Icelandic Sheepdog into your family.