For more information about genetic diversity:

Genetic diversity in the Icelandic Sheepdog.

Application for data of Icelandic Sheepdog

In the past couple of years, dog breeding has had a lot of bad press. Almost everyone that is involved with dogs in The Netherlands, has seen the episode of Radar (Dutch consumer television program) about unhealthy breeds and hereditary diseases in breeds (link). This subject really drew the attention after the English documentary from 2008, named “Pedigree dogs exposed“. A lot of dog breeds have unhealthy breed characteristics, many hereditary diseases and high inbreeding percentages. Besides this, in the past years there have been many law suits against breeders about breeding unhealthy dogs. Luckily the Icelandic Sheepdog doesn’t have a lot of hereditary diseases or unhealthy breed characteristics. But still it is also important for us, breeders, to keep it that way and we need to keep a close eye on our breeding policies in this respect.

As breeders, we often breed to maintain our breed and ideally improve it with regards to exterior, behaviour and working ability. In order to maintain the breed, breeders are very much aware that they cannot do this without looking at the health of the dogs. Genetic diversity is extremely important when it comes to the health of a breed, but it has been virtually impossible to take this into consideration before, simply because the information wasn’t there. 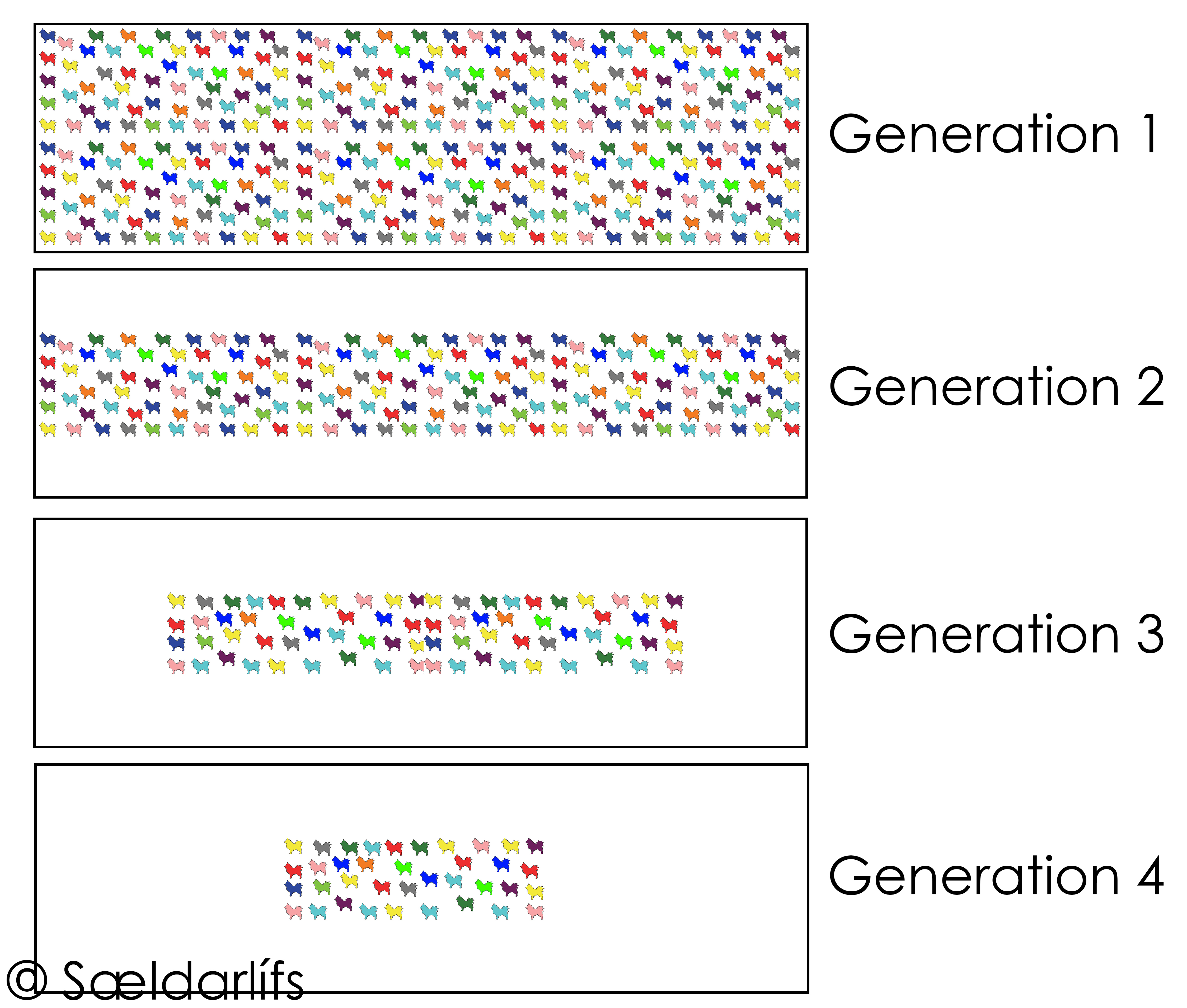 With a 100 founders you breed with the unique genes of 100 individuals, with 20 you only have the unique genes of 20 for your breed. When procreating, you always get half of the genes of the father and the other half of the mother. In a closed population (as we have with purebred dogs and endangered animal species), there is only a limited amount of genes. This lack of new genes restricts us regarding the diversity within the population, and it is therefore extremely important to maintain diversity as much as possible.
Unfortunately within dog breeds often only 1 in every 10 pups is used for the next generation. For the Icelandic Sheepdog, the average litter size is 5 pups per litter. Every pup gets half of his genes from the mother and half of the father. So in every generation we lose genes in dog populations, because we do not use as many animals as possible for the next generation. The image on the right illustrates this perfectly.
In the first generation there are many different dogs with different genes, but because there is only a limited amount of genes that is passed on, you increasingly lose more unique genes. 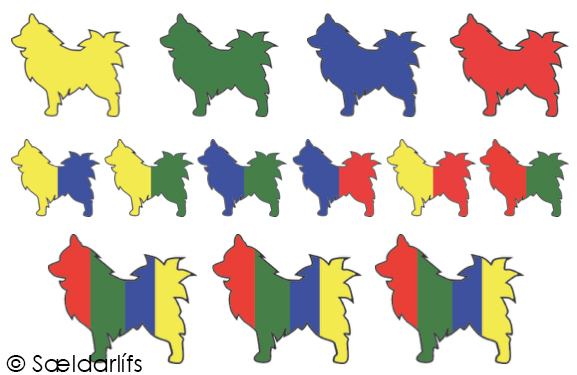 What you want, is that every dog in the population contributes to the next generation. And that this way, you will have dogs with many unique and different genes in them. In the image below you can see that as many as possible different combinations have been made with a few unique dogs, so that each dog provides an equal contribution to the next generation and all genes have been passed on. This is the perfect picture.

This is also the case with the Icelandic Sheepdog, where some males have had over 50 offspring. This makes the inbreeding in our population very high and the diversity low.

Next to these consequences of a lack of diversity, it is also a fact that without diversity, you can never improve your breed anymore. Without diversity, you will keep the same dogs, generation after generation. When you need more feisty dogs to improve the working abilities of a breed, they might not be there anymore. Or if you want to improve tail carriage, there is no possibility to do so. With a lack of diversity, you are also not able to adapt your breed to its surroundings, or the wishes and desires for breeding or the breeding standard.

We can be brief when discussing the benefits of genetic diversity. Genetic diversity prevents all the negative aspects, such as the higher chances of hereditary diseases and inbreeding depression. Next to that, diversity also makes it possible to improve our breed faster and by being able to select, we can achieve our breeding goals. When I use the word ‘selection’, I do not mean ‘exclude’ as we often see with dog breeds.

Luckily there are ways to improve genetic diversity. This is mainly done by:

What we use to get a better overview within our population about the dogs that derive from important lines and that can improve our diversity, is ‘mean kinship’. For more information about mean kinship, visit this page.